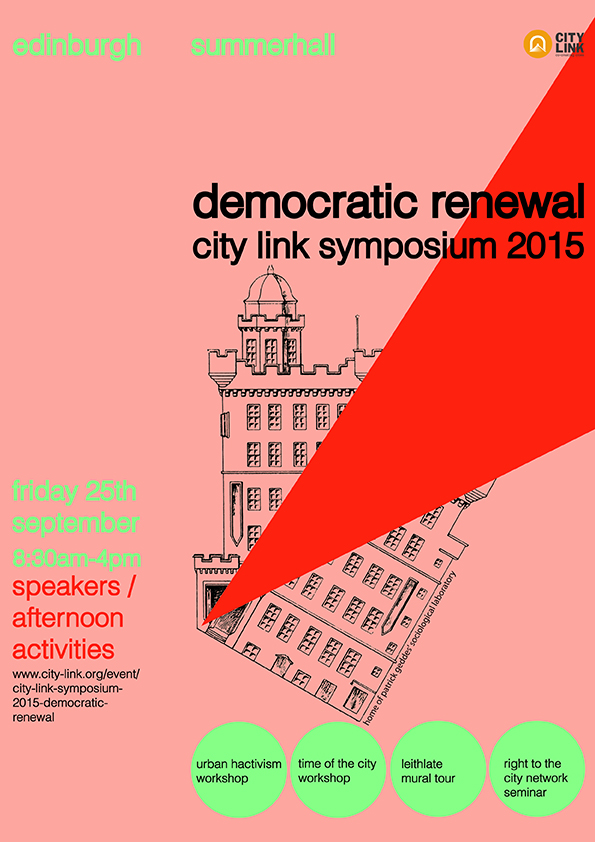 The New Metropolitan is participating in an exciting day of events exploring Democratic Renewal.

Various aspects of urban citizenship will be discussed in a morning of talks at Summerhall and in an afternoon of activities. The symposium is being directed by New Met editor Stacey Hunter and our regular contributor Christoph Lindner will be presenting a talk titled Retro-Walking New York. City Link Festival curators Sara Melson and Carol Hayes from Copenhagen based organisation GivRum presented at the New Met symposium in June (Funded by the IASH International and Interdisciplinary Research Network) and the upcoming events are an example of ongoing interest in urban citizenship themes in Europe. The City Link Symposium 2015 is a celebration of cities and the people and activity that shape them. We have brought together speakers who in different ways have studied, considered, altered or impacted the urban environment.

Join us at Summerhall for a morning of talks where we’ll explore ideas about cities and how they can develop in fairer and more democratic ways. We have devised an exciting series of afternoon workshops across the city including: Urban Hacktivism (Fountainbridge); the LeithLate Mural Tour; Time Of The City (Old Town); and Right to the City (Southside). The symposium day will conclude with a specially created dinner event curated by Fireside Collective. The communal dinner is a ticketed event please book using the Facebook page where there is an Eventbrite link.

Tickets cover entry to the morning symposium talks and the option to select one of four afternoon activities. Tickets cost £20 on the day or £10 in advance. £5 tickets are available for students and the cost is £0 for those who are unemployed.
For advance bookings a number of group rates are available for groups of five + at a special earlybird price of £8 each.

City Link connects cultural communities across Europe to meet and share ideas on how we can make fairer and more democratic cities – knowledge sharing on the international fluxes of democratic urban development. Each year City Link connects two new cities together, and celebrates this connection in a festival. Through the City Link initiative, we aim to promote international collaboration and connect cultural communities beyond the institutional frameworks, enabling anyone to exchange ideas, collaborate and inform how their city could develop in a fair and democratic way.

Sara Melson and Carol Hayes co- present GivRum and the City Link Festival. The changing nature of cities has left behind many disused buildings, fragmented neighborhoods, and a lack of creative vitality. GivRum sees this as an opportunity to bring people together in co-creating the city they want to live in. GivRum is the initiator of City Link; a not­-for-­profit urban life organization that works as an intermediary between local authorities, private owners, and citizens in making their cities. In this way way we bring together different forces to share and act on their interests and perspectives on city development.

Christoph Lindner presents Retro-Walking New York: Slow Urbanism. This talk critically examines the history and design of the High Line, it argues that the park’s revivification of urban-industrial ruins constitutes a double interruption of the global city. At one level, the High Line’s landscape urbanism deliberately disrupt familiar, everyday urban exrrupted transit. It is a mobility, however, designed around detour and delay, rather than speed periences. At another level, the High Line marks the re-introduction of mobility into a space of inteand destination, and in this respect comprises an experiment in slow practice aimed at countering, while simultaneously contributing to, the accelerated urbanism of globalization.

Image courtesy of Joel Sternfeld/Friends of the High Line

Kristoffer Kamp Theisen presents Alternative Community Hubs. The talk discusses how engaged citizens can take the city as a workshop to build alternative community hubs and networks with DIY workshops, artist collectives, associations, business centres, studios, cafes and venues. Kristoffer explores a different role for the municipal player in area renewal projects – specifically in relation to the project ‘Linjen’ in which the city strives to incorporate (permanent) temporality into the planning process. Kristoffer has direct experience dealing with some of the barriers facing grassroots and urban development including investment and gentrification. He will share some strategies to increase opportunities for both voluntary actors to create urban bottom-up urban development and the municipality to influence the quality of expression and content.

Signe Brink Pedersen presents Curating Roskilde: Dream Cities. This talk asks how can experiences and ideas of festival curating and planning be used for developing the ‘real’ city? Signe will present the approach taken by the festival city in Roskilde to show how temporary art and architecture are used there to catalyse urban development. We will learn from her experience of curating Dream City at Roskilde where temporal projects can produce playful and yet critical encounters by inviting a broad range of agencies to engage in the city.

Faith Liddell and Janine Matheson co-present Desire Lines/Thundering Hooves a discussion about Edinburgh that explores how we create a culturally successful city. Faith’s role as Director of Festival’s Edinburgh and Janine’s as Director of Creative Edinburgh have led to some collaborative work centering on the city’s festival and its creatives and cultural producers. Both women were instrumental in the production of Desire Lines, a call to action for creators, producers, spectators and participants in the city’s cultural life to join a dynamic city-wide conversation. The outcome has been a series of clear aims and actions proposed by the cultural community, to be delivered in partnership with the wide range of organisations and individuals who have Edinburgh’s best interests at heart.

Jason Roberts will be presenting City Hacktivism. If city officials won’t do their part to make public spaces more fun, efficient, useful, comfortable and creative, citizens can take matters into their own hands. DIY urbanism, or ‘hacktivism,’ is the practice of altering urban environments in ways that aren’t officially sanctioned. Jason’s experiences prove that people that live in a neighborhood can jumpstart its revitalization in a single weekend. A founding member of Better Block – Jason’s team identified the barriers to revitalization, established a vision for what they wanted their neighborhood to become, and stayed disciplined by starting with just a single urban block.

In the west of the city, along the banks of the Union Canal, join Jason Roberts and Akiko Kobayashi to put some themes of DIY Urbanism into action. Join this workshop to learn about hands-on, practical city-hacks for your own neighbourhood.

TIME OF THE CITY – WORKSHOP

In the heart of the city’s medieval Old Town, meet up at CodeBase – the largest technology incubator in the UK. There, Chris Speed and Larissa Pschetz from Edinburgh College of Art’s Design Informatics department will lead a workshop where you will go out in the city to identify and collect data that describe the multiple rhythms that contribute to shape the urban environment. This data will be combined in a collective installation in the form of a digital map.

LeithLate will lead a Mural Tour, taking in some of Leith’s murals (both old and new). Tours will start at the iconic Leith mural painted by Tim Chalk and Paul Grime in the 1980s and finish at The Leith Aquatic mural produced by Blameless on Halmyre Street. The tour will conclude with an exhibition of Danish street art by Classic Copenhagen photographer Sandra Hoj at the Out Of The Blue Drill Hall where tea and Tunnocks Teacakes will be served in the new gallery space.

RIGHT TO THE CITY NETWORK – SEMINAR

This seminar is for those interested in urban activism and politics from a grassroots level and will give examples of successful processes and campaigns. Till Haupt will present the initiative “Komm In die Gänge” (aka Gängeviertel) fighting for the last part of the city of Hamburg’s Gängeviertel district where squatters, residents, artists and activists have been negotiating with the city of Hamburg since 2009 to decide on the area’s future.

Unless explicitly stated otherwise, all material is
© 2021 The New Metropolitan / University of Edinburgh

Based on a theme by Theme by Anders Noren Up ↑